Discipline "Tactics and Techniques for Escorting a VIP"

Purpose of Exercise: Preservation of the life and dignity of the "guarded person" during escorts on foot after an assault imitation by one of the assistants (from the group), following instructions by a referee. 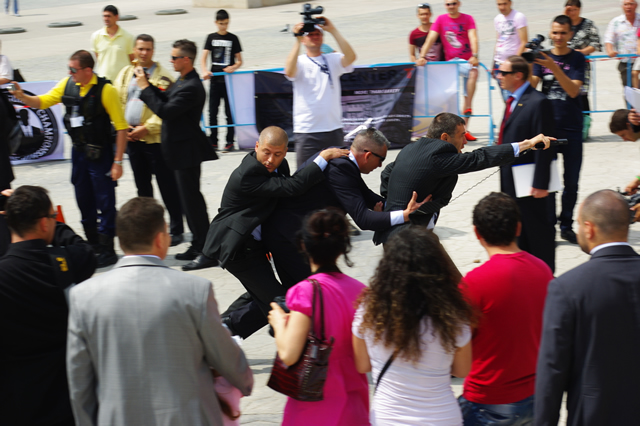 Conditions to Carry Out the Exercise: Two cars are pulled over at a certain place. One of the cars has the escorted person and one bodyguard inside and the second car - two bodyguards. A cordon of 10-15 (ten to fifteen) assistants and dummy models of buildings are situated along the route of the team.

The guarding team gets off the car, surrounds the guarded person and starts moving towards the cordon of assistants. During the movement along the route, one of the assistants (from the group), following instructions from the referee imitates gun assault, a blow with a hand, leg, knife or available object.

One of the bodyguards deflects the assault demonstrating a physical defence technique, while the other two cover the guarded person and evacuate him to a shelter or to a car.

Assessment of the Discipline: The assessment of the discipline is done by a team of referees. The number of points for each zone is reduced depending on the errors made.

Standings: The standing is determined by the sum of all points scored by the team. The team scoring the most points takes first place.