The hand-to-hand combat discipline is performed as a demonstration of activities for defence from a blow with a knife, a kick or a baton strike. The demonstration is performed in turn by two competitors from the team, while the rest of the participants assist them.

The participant who is going to perform the techniques draws a ticket from the referee without reading its content and stands at a distance from the rest of the participants turning his back on them. The referee lets the assistants know the content of the ticket and determines the sequence of the attacks.

A list of attacking activities is specified in the tickets consisting of three types of assaults.

The Necessary Equipment to Carry Out the Discipline Are: soft covering to protect from injury (tatami), training knives, short batons. 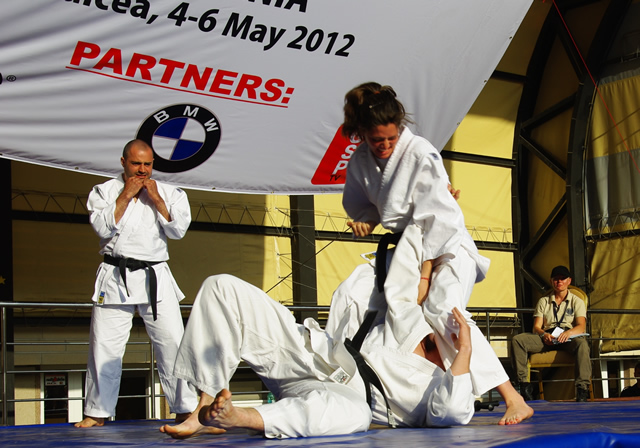 Conditions to Carry Out the Exercise:

The performer and three assistants take a starting position: the competitor, who is going to perform the techniques takes position in the centre of the tatami and the assistants are at distance of 1.5 - 2 metres around him. The first technique is performed at the referee's command, the second and the third after the performer takes initial position facing the next assistant. The defensive activities are performed consecutively one after the other ending in a painful locking technique or a throw with a finishing blow.

Assessment of the Discipline: The assessment of the discipline is be done by a team of referees. Each of the techniques is evaluated on a ten-point grading system by four referees on the playground and one main referee for the discipline. The referees evaluate each technique of the performer separately. The highest and the lowest grades are eliminated. The rest of the grades are summed to form the final score of the performer.