Discipline "Shooting at a Target while Guarding"

Conditions to Carry Out the Exercise: The guarded person around whom there are three competitors, takes a starting position at a distance of 25 - 30 m. from the targets.

The guns are loaded with three bullets with the safety locks engaged. They are in the holster on the waist or under the armpit.

Upon a command from the referee, the team sets off for the targets - silhouettes of people. The distance between the targets is 2-3 meters.

When the team reaches the firing line, which is 10-15 meters away from the targets, simultaneously with the appearance of the targets, within 4 seconds, the bodyguard, closest to the target cries out "Threat" by indicating the direction or the special features of the target imitating gun threat.

The front competitor produces two shots to the chest and one to the head at one of the five targets imitating the threat.

The other two bodyguards, covering with their bodies the guarded person, take him to a shelter in the opposite direction.

Assessment of the Discipline: The reporting of the results from the hits in the targets is done by three referees.

Standings: The standing of the teams is determined by the sum of the points, scored by the competitors - members of the teams. The team scoring the most points takes first place. 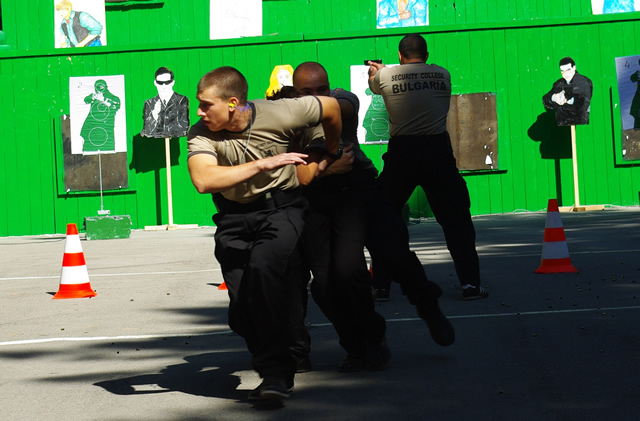